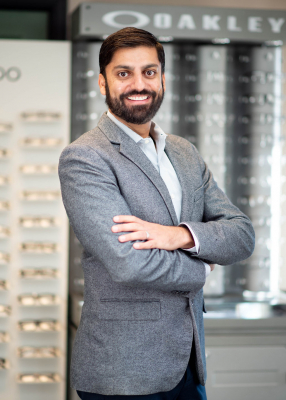 Dr. Dedhar was born and raised in Nepean, Ontario. He first began practicing in Carleton Place upon graduating from the University of Waterloo School of Optometry in 2013. The great sense of community and welcoming people of Carleton Place was only one of the reasons Dr. Dedhar decided to grow his practice and eventually became an owner in 2021.
Prior to completing his Optometry Degree, Dr. Dedhar completed a Bachelor of Science at Carleton University in 2007. He then went on to complete a second Bachelor of Science in Ophthalmic Medical Technology at the University of Ottawa Eye Institute in 2009. During his training, Dr. Dedhar gained valuable experience in ocular diagnostic testing and imaging while working alongside ophthalmologists in a variety of sub-specialties. His interests include paediatric eye care, glaucoma and retinal disease management.
During his time in school, Dr. Dedhar served on the executive committee for VOSH (Volunteer Optometric Services to Humanity). Not only did he help organize mission trips across the world but he was also fortunate to be able to participate in serving underprivileged communities in Morocco, Peru and Nunavut. In his final year he completed an internship at the Lions Sight First Eye Hospital in Malawi, Africa, for which he was awarded the David Johnston International Experience Award. He has served as past president of the Ottawa Society of Optometrists and remains actively involved with the Ontario Association of Optometrists.
In his spare time, Dr. Dedhar enjoys travel, hockey, golf and tennis. He has successfully reached the summit of Mount Kilimanjaro in his younger days. He is also a proud father of two beautiful girls.