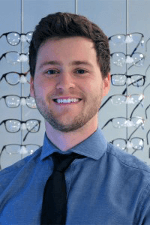 In his final year of Optometric studies, Dr. Chase completed a four-month ocular disease rotation at an Ophthalmology care centre in his hometown of Edmonton, Alberta. There he worked alongside doctors with a special focus in intraocular inflammatory diseases, glaucoma management, surgical correction of cataracts, strabismus and droopy eyelids, and paediatric eye care. This experience sparked a keen interest in the management of various ocular conditions.

During his time as an Optometry student, Dr. Chase performed three years in a row at the annual Coffee House, an event put on by the Lions Club to help raise funds to purchase and train seeing eye dogs for the visually impaired in Waterloo.